Dale Huddleston awarded with the OVA Officials Award of Merit

In his early years, Dale Huddleston was a football player at Queens University with no inclination that he had a half century career in volleyball heading his way. Enrolled in the Physical Education program, and already refereeing football, a teammates wife told Dale to come out and get his volleyball referee certification. In the winter of 1971, Dale’s volleyball journey would begin.

Huddleston graduated, spent four years working at the YMCA, then became a teacher at Ernestown Secondary School, outside of Kingston, Ontario. A successful coach as well, Dale would help lead the volleyball teams to twenty Eastern Ontario Championships, six Kingston area championships, 12 appearances at OFSAA, picking up silver in 2002 and bronze in 1998.

He was able to accomplish this all while travelling around presiding over the biggest games in the province as a level 4 referee. “I've been pretty fortunate because I always had a boss who would let me travel. So even if we didn't go to OFSAA as a team that year, all of a sudden my phone would ring and somebody would say Dale, how would you like to come to officiate?” And off he would go.

High-school Championships, University Championships and on to international friendlies. He working the lines in Ottawa when Canada beat Brazil for the first time. These days Dale insists that he should just be mentoring the next generation with programs set up by Bob Rocque and the OVA. Though he is very happy filling the role of referee supervisor at the major competitions as it allows him to help other referees fine tune their skills and enjoy the social aspects of the game.

Huddleston is really pushing the idea that the next generation needs to get involved in refereeing soon as numbers are dwindling. “We have to get more people involved. I think volleyball we're working at it. We're getting there, but this thing called a pandemic really, really, it hurt all sports, but it hurt it hurt volleyball pretty much because of course we have to play like the indoor game we play inside all the time.” With big events such as Ontario Championships, where there are multiple courts running all day for multiple days, he doesn’t want to see referees being brought in from FIVB or NORCECA because of lack of referee numbers in the province. Huddleston always tells prospective referees “It's the best seat in the house. If they love volleyball, they may not be able to play anymore, or they may not be able to play period, but if they love the game we can teach them how to become a referee.”

A good referee must have passion for the sport and a student of the game to know all the rules but there are intangibles that separate the good referees from the great ones. “You have to realize that you're in a business where you can please 50% of the people about 50% of the time,” explains Huddleston. “You're going to make mistakes. The whole kicker is to recover from the mistake and hopefully the mistakes don't happen at a crucial time sort of thing. And it's the way you rebound. It's kind of like life, you know.”

This award is a culmination of a great career and adds to a long list of accolades. The Bing Caswell Award of Honour from the Ontario Physical and Health Education Association, the Builder of Sports Award from Kingston Kiwanis Club, the Pete Beach Award for Coaching Excellence from OFSAA, the Syl Apps Special Achievement Award from the Government of Ontario, the Investors Group Volunteer Sport Administrator Award and an OVA Achievement Award is quite the list but Dale is still very thankful of any recognition. “It's hugely humbling, I've been surrounded by guys who have and girls who have won this award for my whole life and now I'm that guy,” says Dale. “I used to tease them all about being the worst experienced person in the room, and all of the sudden, I guess that makes me one of the most experienced people in the room now. So, it's humbling.”  Huddleston jokingly went on, “thanks for letting something like this happen when I can still remember all the names in the room. You know so far, I've been able to avoid posthumous awards and I'd like to keep that going for a while.”

OVA hopes you keep it going as well, congratulations on the award!

About the Officials' Award of Merit

Established in 1998 and presented by the Officials' Committee in recognition of dedicated service to officiating in Ontario. The nominee must demonstrate dedication, skill, an affirmative attitude and be recognized by their peers as having a positive influence as a certified OVA Official. 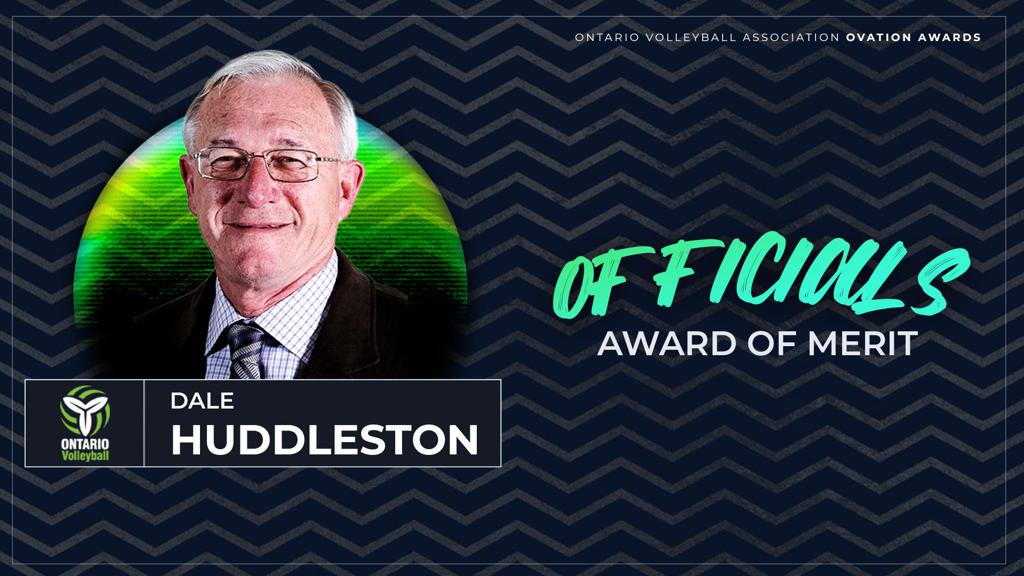