The OVA is proud to announce Anthony DeGirolamo of the University of Windsor and Sullie Sundara of McMaster University as the 2022 male recipient of the Scarborough Solars Award.

Beginning his volleyball journey by competing at OVA Summer Beach Tour, Anthony quickly transitioned to court and club with Storm Volleyball. Six seasons later with provincial championship competition under his belt he was ready for Team O. “ These events are incredible showcases of the amazing talent and community that volleyball in Ontario has,” said Anthony. “I will always be grateful to the OVA for the impact these experiences have had on me.”

Setting for Team Ontario in 2015 and 2016 set the stage for a promising OUA career.  Studying Engineering at Windsor University alone would take great effort. Doing it while garnering OUA all-rookie shows what type of student-athlete he is. “He is of high character and is an excellent student,” says Windsor Head Coach James Gravelle. “He is a valued member of our school community, and a leader on our team.”

In four years of OUA volleyball through COVID stoppages, DeGirolamo has spearhead a pro-style offence that has helped lead his team to two bronze medals. With one year of eligibility left Anthony believes he is just getting started, “I have always been a late bloomer but the strides I have made in the last two years only made me hungrier to maximize my potential. My goal is to play at the highest level and ultimately represent Canada.”

When asked who he would like to thank for help along his volleyball career Anthony was quick to respond. “My parents.  My mom for always doing everything she can to support me and my dad for being a great coach but still knowing when to just be my dad.”

“Winning this award is an honour because it means that there are people that believe in me and believe I can play volleyball at the next level,” says DeGirlamo. “It will also help me to spend more time focusing on improving my game.”

Congratulations Anthony on receiving this award!

In recent memory there have been very few rookie seasons like the one Sullie Sundara just completed with McMaster. A product of Ottawa Mavericks and a constant figure amongst Team Ontario, having played on Red, Black, and Elite teams, Sullie arrived at McMaster expecting to be a reserve outside hitter on a strong team. When her chance to play opened up she grasped it and started the rest of the season garnering multiple awards as McMaster advanced to the OUA West Division semi-final.

At the end of her season, Sullie was named to the U-Sport All-Rookie Team, OUA West First Team All-Star, OUA West Rookie of the Year, and OUA West All-Rookie Team.  At McMaster she was awarded the Marilynn Hawkrigg Award as the best rookie in her sport. To cap it all off she was chosen from the U21 Junior National Training Team to compete for Canada in Mexico at this years U21 Pan American Cup. Of the experience Sullie was very excited, “It was a very high level of volleyball playing with the best girls in my age group across the country and then also just like my first international experience. And it was just cool to play in a tournament against the best athletes in all the Americas.”

Sullie’s University coach Tim Louks did not hold back on his praise of not just her play but the way that she carries herself. “She has handled this recognition with humility, appreciation and gratitude,” said Louks. “ She is an explosive and colourful player that has raised the bar in our training room and shown our fan base some outstanding competition.  Her determination to be better and understand the game is extremely helpful to her and her teammates. She is resilient, resourceful, and responsible. Helping to raise the standard and expectation in our team room and around the court space.”

No one gets to where they are without some influences, Sullie credits her parents sport-oriented lifestyle and her older sister for showing her a pathway to success as she saw how hard her sister had to work to play post-secondary athletics. She also wanted to thank her coaches. “There's a lot of them, hard to name them all, but just everyone behind the scenes that works really hard with all the team Ontario programs because that really helped my development throughout the years, and I don't think I'd be where I am without those programs,” said Sundara. “They offered many experiences that helped me grow as a person, an athlete, and then also my club coaches because same reason you know, they also helped me and then my university coaches Tim (Louks), Nathan (Janzen), all of them.”

Sandara is not resting on her laurels as she has set her eyes on the OUA title next year with a trip to nationals as well. Beyond that she hopes to play in the U21 Pan Am tournament again next year, make the NextGen program and eventually the senior national team. One can be certain with her humble attitude and high skill there is a good chance that she reaches those goals.

Congratulations Sullie on receiving this award!

About the Scarborough Solars Award

The Scarborough Solars Award is presented annually as part of the OVAtion Awards to a minimum of two Ontario athletes (equal number of male and female athletes) who have been selected to, or who have the ability to, represent Ontario and/or Canada in international indoor or beach volleyball competitions. With the purpose to assist Ontario athletes to pursue their volleyball objectives, the award provides no more than $1,000 or no less than $500 per athlete, per year (one female & one male).

The OVA will be recognizing and honouring individuals who have been making contributions to the growth and development of volleyball through the 2022 OVAtion Awards. Winners in the Athlete and Service categories will be announced digitally through the Ontario Volleyball website (ontariovolleyball.org) and across OVA social media channels. 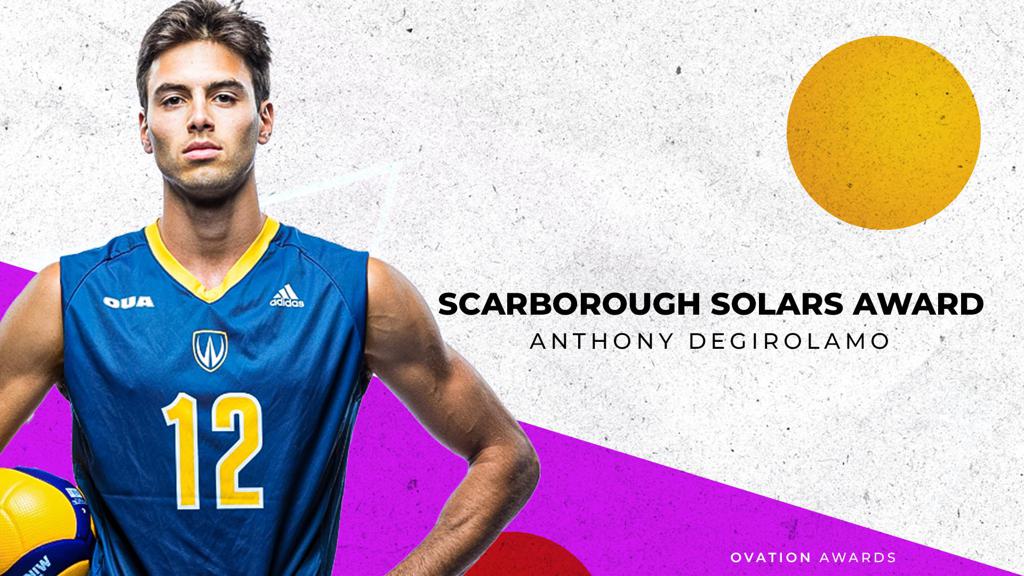