The OVA is proud to announce the recipients of the 2021 Diane Wood Special Achievement Award. Presented to an individual to recognize an outstanding contribution to volleyball at the provincial level for 15 years or more.

The namesake of the award, Diane Wood is the kind of volunteer who coordinated adult competitive leagues (8 divisions and more than 100 teams) from her pre-computer-era kitchen table! Since the late 60’s, Diane has established herself as a 40 year tireless, world-class volunteer, a athlete of 25 years, a National Referee, a Provincial Official’s Chair, a founding member of the Scarborough Solars Volleyball Club in the 70’s, a member of the organizing committee for the first Canadian FIVB beach volleyball event, and an almost 20 year employee at the OVA. Diane began full-time work for the OVA as a program coordinator and retired from her position as Executive Director in 2005. Truly world class!

We are pleased to introduce the following individuals as part of the 2021 class: 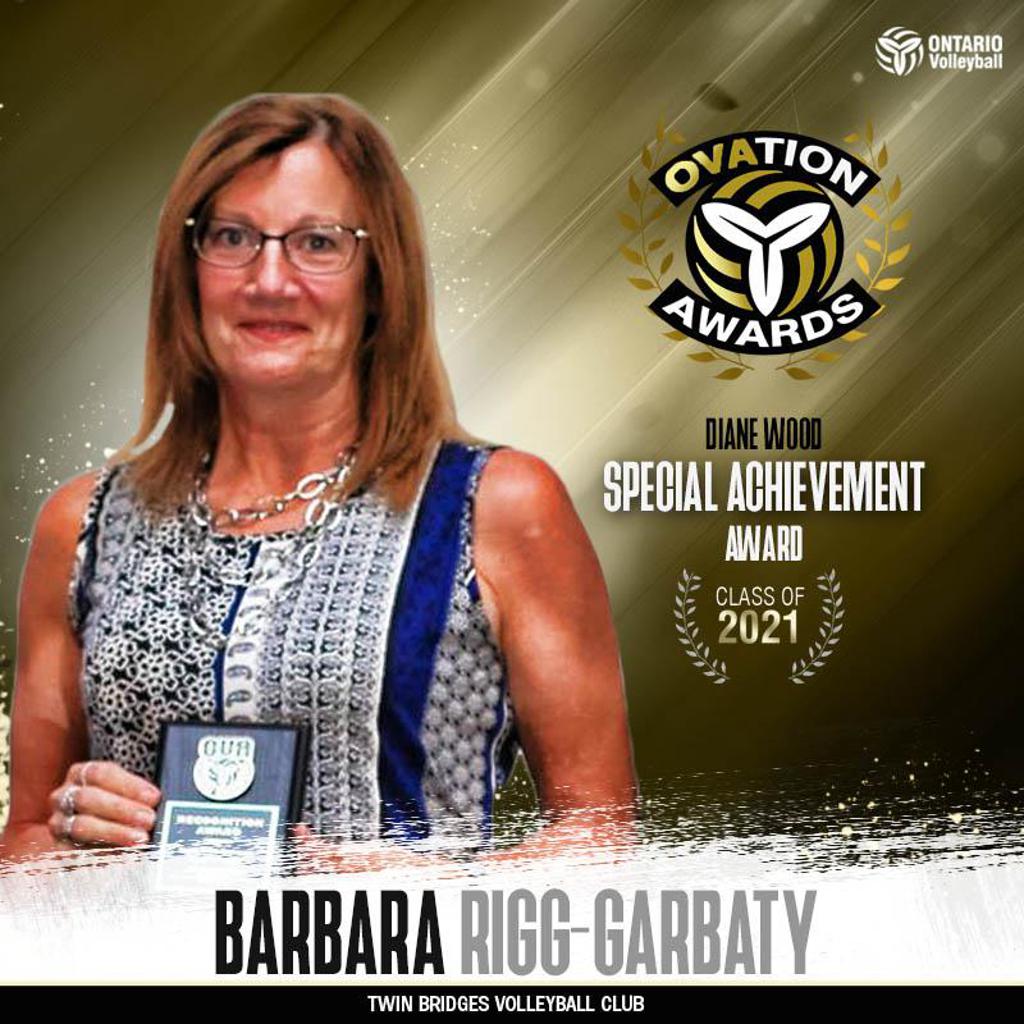 Barbara Rigg-Garbaty has been actively involved in the sport of volleyball for over 50 years. Not only is she an exceptional player, coach, referee, and mentor, but she has also been a pivotal force in the establishment of volleyball in the Sarnia-Lambton community. In every role, no matter the capacity, Barbara has exuded a passion and love of the game which has been evident to anyone who’s had the opportunity to work with her.

The Co-Founder and Co-President of the Twin Bridges Volleyball Club hasn’t slowed down since she was an athlete at Harrow High School, and then for the University of Windsor. As a university sophomore Barbara took interest in refereeing, receiving her certification shortly after and has been involved in the field since. Starting in 1980, she’s been organizing and hosting annual clinics to recruit young players and coaches and since 2012, has been serving as the referee’s convenor for secondary schools in the Lambton-Kent county where she was also a teacher and coach for just over 30 years.

Her just-as-impressive coaching career took off when she founded the Sarnia Women’s Volleyball Club in 1979 where she both played and coached for the Senior Women’s B travel team up until 1987. In this span with the club, Barbara got a taste of the Ontario college circuit when she was hired to the coaching staff of the Lambton College women’s varsity team for a season. She would return to the college two decades later and coached the team once more for two seasons. Barbara is now on the cusp on being fully certified as a Performance Coach and has taken the steps towards the certification.

Barbara has coached well over 2,000 players and 70% of the coaches that have walked through the doors of the Twin Bridges Volleyball Club, never hesitating to train the graduated players who decide to return to their Club as a coach. As one of the hands steering the ship, Barbara takes on a slew of responsibilities to ensure the success of her members and the club. In addition to coaching more than one team each season for the last 16 years as well as for the club’s house league program, she directs the athlete development of her club across all levels and was instrumental in bringing Spikes on the Beach and Smashball grassroots programs to Sarnia. She organizes the gym times for the club’s travel and house league programs, orders equipment and looks after its maintenance and is constantly keeping her coaching staff updated with the current techniques and certifications through many hours put into online and in-class courses.

Outside of the tireless work that goes into the duties as a club executive, it’s often the smaller details that truly demonstrate the passion for the work that you’re in. For example, Barbara will sew fleece volleyball blankets/pillows for the teams she coaches every year. Sometimes it’s those little things that players remember the most. Congratulations, Barbara! Just keep bumping along. 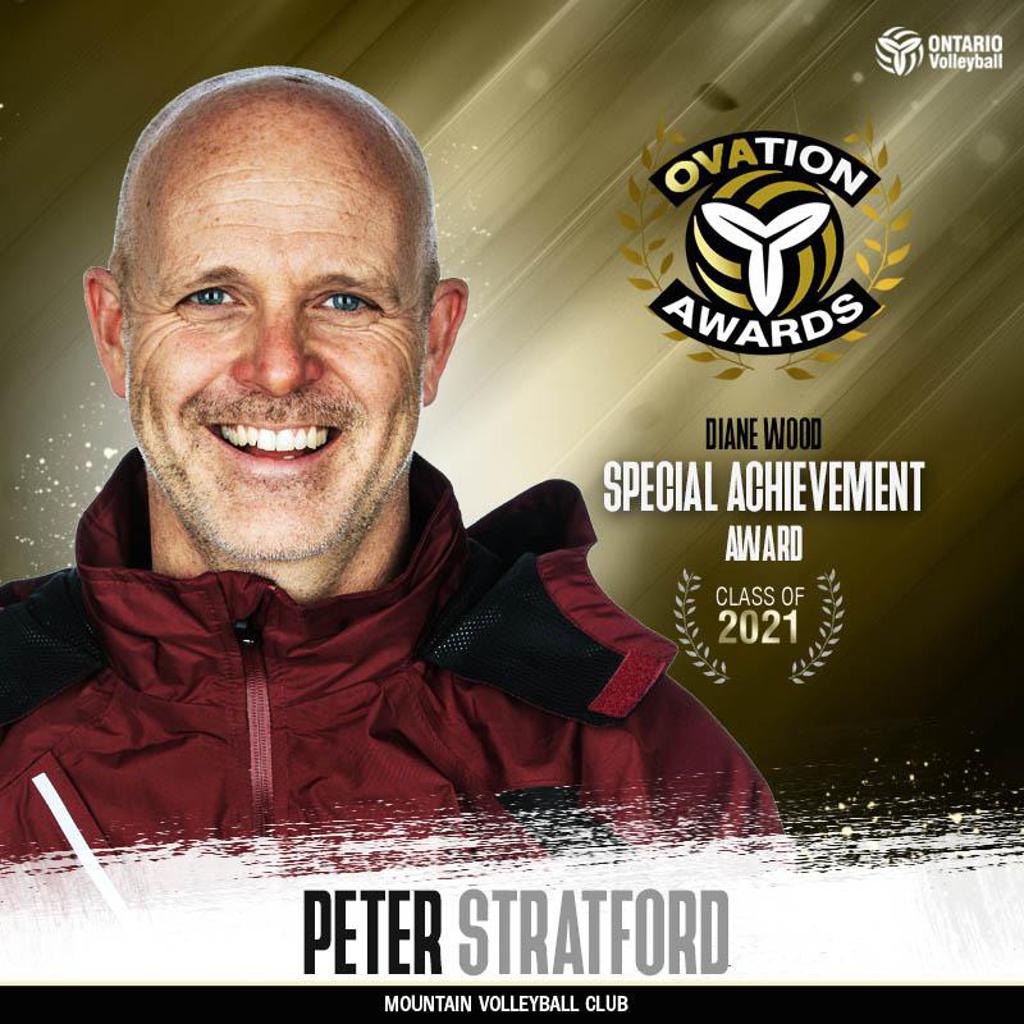 Peter is a Health and Physical Education teacher in the Halton Region.  For the past 11 years, he has coached the Mountain Volleyball Club (MVC) 13U, 14U, 15U 16U team. Prior to being on MVC’s coaching staff , he coached the Waterdown Raiders 14-17U teams for 6 years competing in the Ontario Championships, Eastern Canadian Championship and finishing with a silver medal at the Division I level at the latter event.

As well as coordinator of the Elementary School Provincial Volleyball Cup, Peter is also the Course Director for Elementary Athletics at the Ontario Educational Leadership Centre and has been the leadership coach at the MVC leadership weekends hosted by the club for the athletes.

Peter has been an integral part of the development of female volleyball players ages 12-17 throughout Hamilton and the Golden Horseshoe area.  When he was with Waterdown, Peter had coached numerous club teams at all levels to bronze, silver and gold medal performances at OVA tournaments. With MVC,  he has re-established that same developmental attitude and winning record, where he currently coaches the 15U Columbia team. In addition to his coaching skills, Peter maintains a positive relationship with all members of the club and shows a genuine concern for their well-being off the court.  He is heavily involved in the administration of the club as President, Registrar and Treasurer.

Peter has run leadership sessions for club coaches, a job he also dedicates himself to in the summer at the Ministry of Education Leadership Camp (OELC) at Lake Couchiching. His commitment and talent in this area were recognized when he was honoured at the 2012 Ontario Sport Awards with the Syl Apps Volunteer Award for his outstanding work with intramurals and developing a strong base for student involvement in physical activity and sport. In 2018, Peter was recognized by the OVA as Male  Developmental Coach of the Year and in 2020, was awarded the Achievement Award.

Peter has extended his coaching involvement beyond the MVC club system, coaching both junior and senior boys and girls at the elementary school where he has taught and coached for 28 years. Congratulations, Peter! 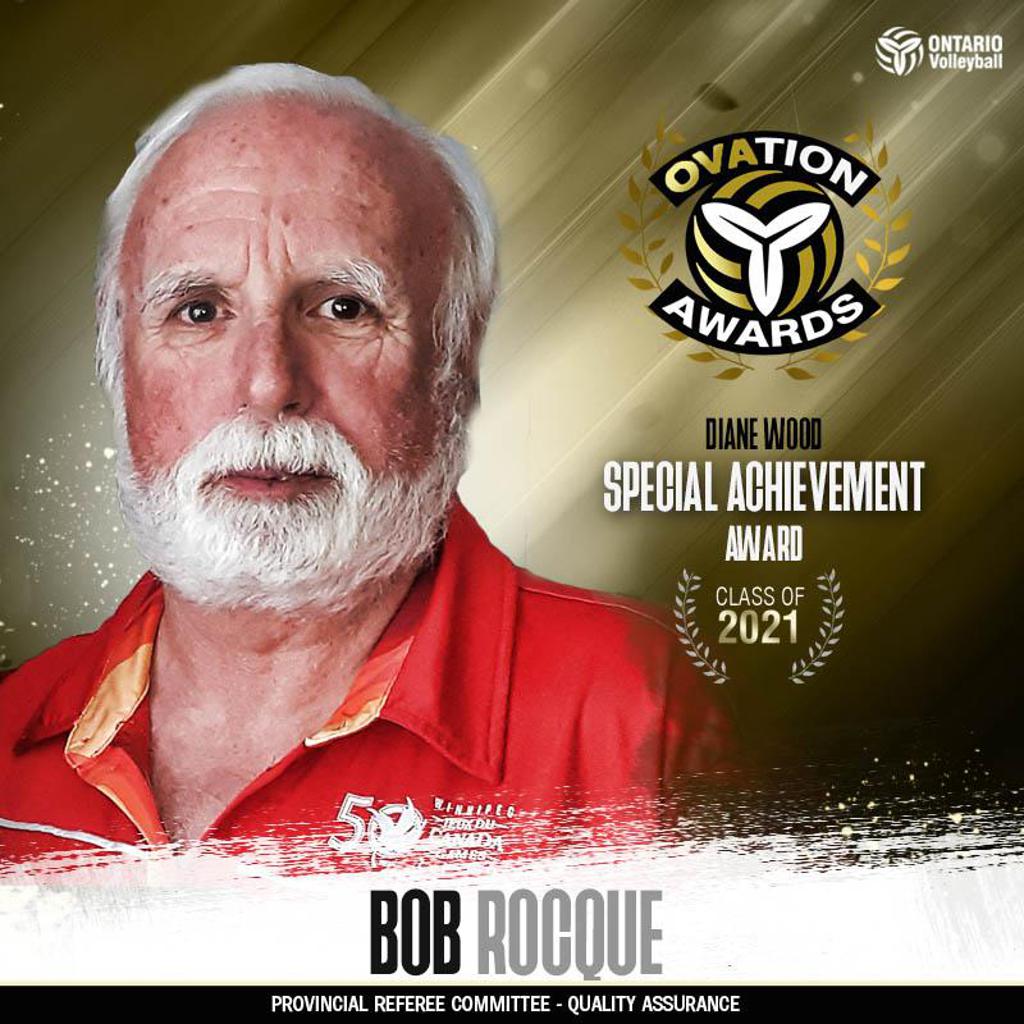 Bob has officiated in almost every corner of Canadian competition, and certainly in his home province of Ontario, with assignments at the Ontario Championships, Volleyball Canada Nationals, OCAA, OUA, CCAA, U Sports and National Team Challenge Cups. On the beach, Bob has enjoyed travels to international events held in Toronto, North Bay, Montreal and also at the World Championships in Bermuda.

Bob continues to be a pillar in the community and is always giving back. He is currently the Quality Assurance and has held previous positions in the Referee Committee as the Operations Chair and Program Chair. Bob is an OVA Certified Clinician, an OVA Supervisor and Mentor, VC Supervisor and Certified Mentor.

In addition, he has also a Certified Mentor and Supervisor on the beach. Bob has been instrumental in the creation of the Mentorship Program that was rolled out in Ontario and he has also assisted in the development of the program across the country.

His leadership and support through the years have benefitted many referees on their journeys, from entering the fold to acquiring new badges. Congratulations, Bob! 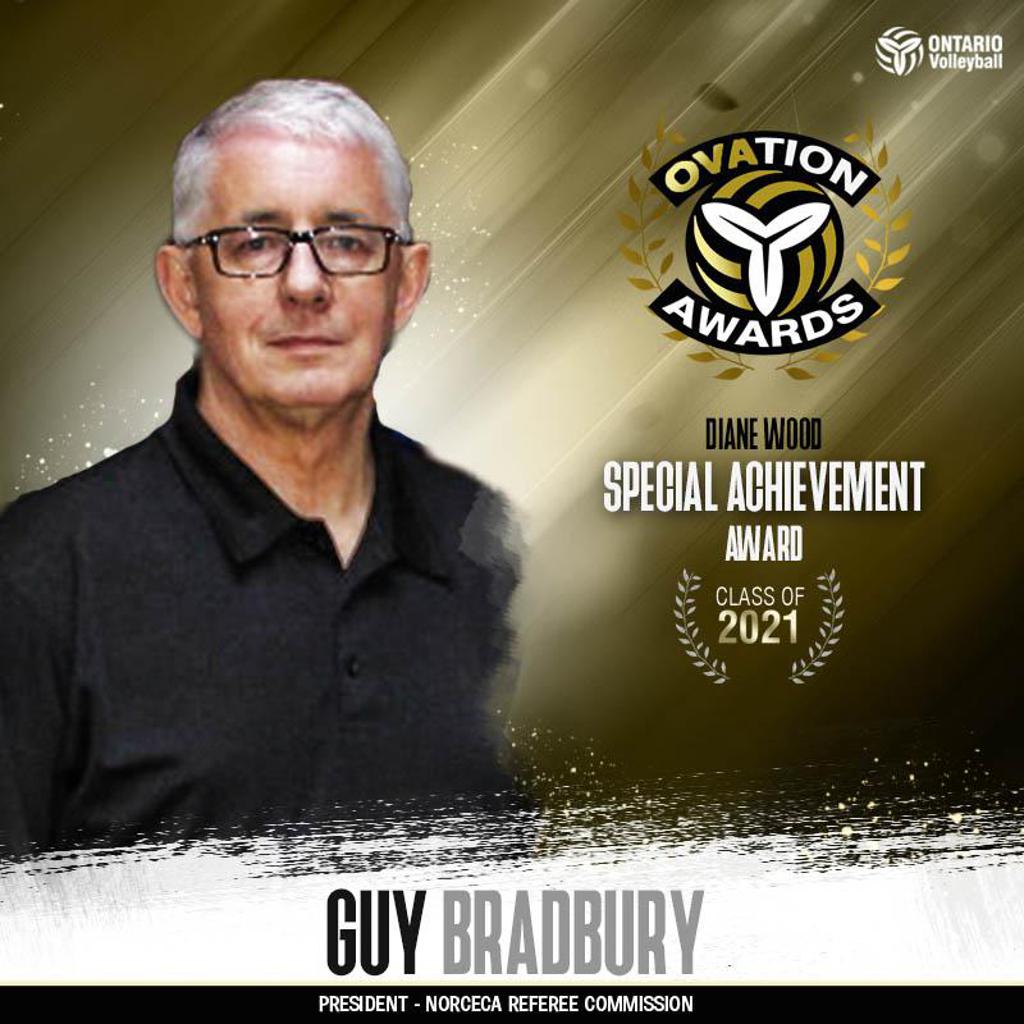 Guy Bradbury has been a major player in the sport of volleyball not only in Ontario and Canada, but around the world! Guy has been whistling for 50 years which has taken him to all parts of Canada and around the globe when he received his FIVB certification in 1983.

On a National level, Guy has officiated many matches in the U Sports system and has worked countless gold medal matches throughout his career. In his career, he has been assigned to two Canada Games:  the first in Brandon, Manitoba in 1979 and second at the 2001 Games in London. His work on the international platform has taken him to the World Student Games on three continents on three occasions. Beginning in Edmonton in 1983, the event two years later brought Guy to Japan and finally to Sicily, Italy in 1997. His travels continued all over the world to countries such as Holland, Germany, Peru, Cuba, Columbia, Argentina, Tunisia, Brazil and the United States, to name a few.

Guy has had a strong influence on many referees in Canada, as he is consistently developing and mentoring these referees from coast to coast. His work with Volleyball Canada has been praised, serving on the Board of Directors and is in his current role as the High Performance/International Development Chair. Guys sits on the FIVB Refereeing & Rules Commission and has recently been appointed the President of the Referee Commission in NORCECA.

He is a Certified Clinician/Evaluator for the National Promotions Program along with being a Certified Supervisor, Mentor and Coach at VC and the FIVB.

With the OVA, Guy was integral to the development and rollout of the Referee Engagement Centre, a platform to connect referees through online tools, forums and resources to ensure they are constantly engaged and up to date as a referee. Alongside Provincial Referee Chair Andrew Robb, Guy also conducts the educational Let’s Talk: Volleyball Rules video series for the province’s referees where guests are brought in from across the globe discussing an assortment of topics and scenarios to keep the referees mind sharp. Congratulations, Guy! 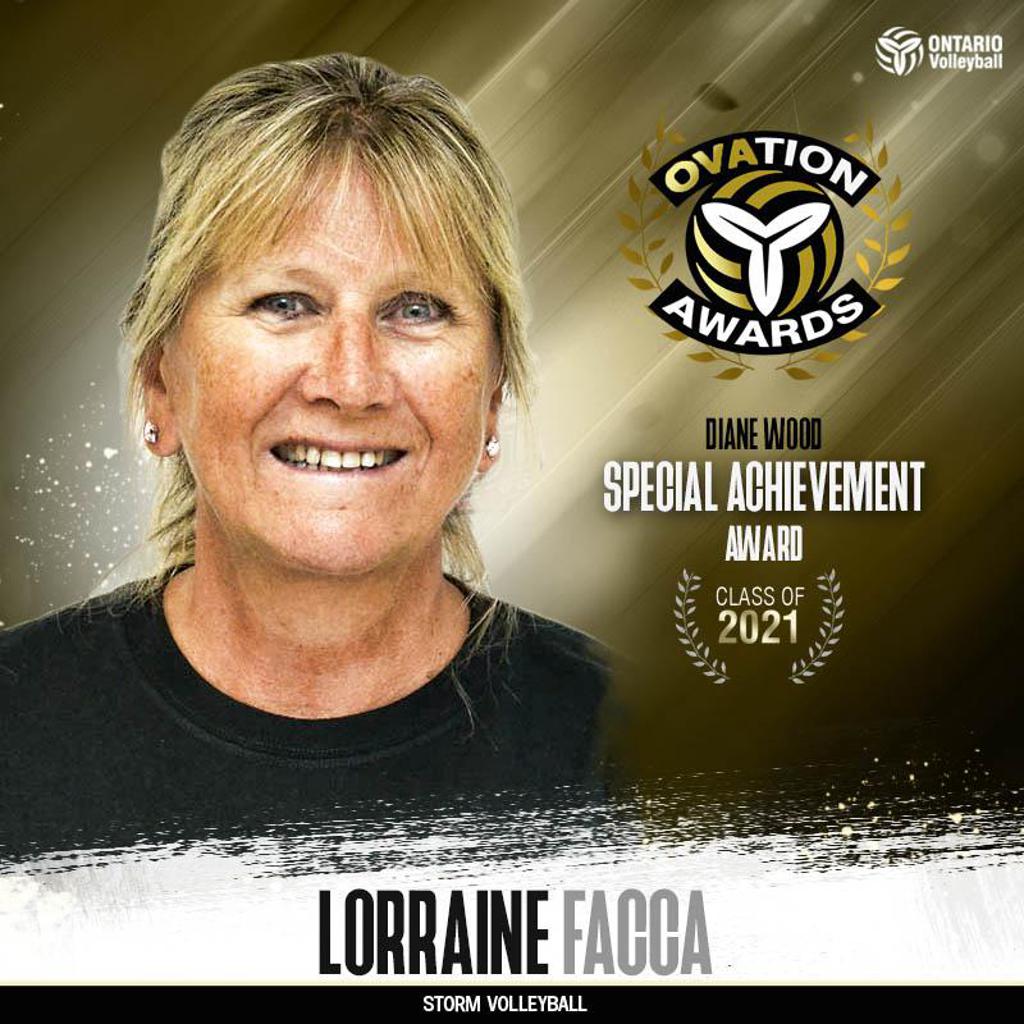 Now close to two decades, Lorraine Facca has been instrumental in the growth and development of Storm Volleyball, but her contributions to the sport go back further. A student-athlete on the women’s volleyball team for the Dalhousie Tigers, Lorraine and her teammates did what no other Atlantic Canadian university had done – win a CIAU (now U Sports) women’s volleyball national championship. That performance alone was enough for Lorraine and the team to be immortalized in the Dalhousie Sports Hall of Fame and the Nova Scotia Sports Hall of Fame.

When it was time for Lorraine’s daughter, Louise, to pursue her collegiate career she followed in her mother’s footsteps and donned the black and gold of the Tigers as a Dalhousie second generation student-athlete. Lorraine had been coaching her while she competed for Storm, as an Assistant Coach with club founder Bruce Stafford at the helm, and when Louise moved on to Dalhousie Lorraine took the role of Head Coach and has been leading since. She most recently started with club’s 12U girls, and although the season was anything but normal, Lorraine kept them engaged so that they are prepared for a return to sport.  With her longevity in the sport as a player and coach, Lorraine has brought a wealth of experience and knowledge to her teams.

Generous in her spare time when it comes to volleyball, Lorraine coaches her son, Stephen and his high school team when she learned that no coach was available to run the program. Lorraine has also been involved with Regional Games and in 2011, was honoured with the Development Coach of the Year.

When she’s not coaching Ontario’s youth in Aurora, Lorraine teaches volleyball at York University’s School of Kinesiology and Health Science where her students learn the basic skills in a game situations as well as the team systems and dynamics to enjoy the game recreationally. Congratulations, Lorraine!