Mike Bugarski and Sandy Silver Coaches of the Year named

Since 1992,  Gerry DeGirolamo has been involved in the volleyball community in a variety of capacities, but none have left an impact like his coaching prowess.

Gerry was a student-athlete at the University of Toronto under the tutelage of Orest Stanko and enjoyed a playing career that would see him become a two-time OUA Champion, a CIS (now USports) silver medalist and later, an inductee in the Varsity Blues Hall of Fame as a member of the 1990-91 team. With his mind for the game and experience on the court, a coaching opportunity for the Newmarket native seemed inevitable and it wouldn’t take long for Gerry to make the jump to coaching, immediately transitioning to the Varsity Blues’ Assistant Coach position once he graduated. From 1992-1996, Gerry would be with his alma mater and the Queens University varsity team as an assistant coach. During these roles, he would begin his career as a teacher within the York Region District School Board.

In 2015, Gerry would find opportunities in the high-performance stream, selected to the High Performance Camp (HPC) coaching staff and dedicating his time as an assistant coach for the 15U Girls. With this squad, a gold medal was earned at the National Team Challenge Cup in British Columbia that year. Climbing the ranks of Team Ontario from the HPC to Assistant Coach of the 2018 Team Ontario Red Boys to Guest Coach of the 2019 Team Ontario Black Girls where his responsibilities for evaluation and planning shined, he has been a fixture in the program for six years. Currently, he is the Assistant Coach for the Team Ontario Elite Girls.

Gerry continues to teach as an Elementary School Teacher in the York Region, doubling as coach and Athletic Representative. Outside of volleyball Gerry also shares a passion for basketball, a NCCP Level 2 coach in the sport.

In 2020, he was awarded the Recognition Award at the Ontario Volleyball Association’s annual OVAtion Awards and this year, is the deserving recipient of the 2021 Mike Bugarski Male Coach of the Year award.

Presented annually to an outstanding male coach for his success in the previous season and for his contribution to the development of our sport in Ontario.

History: Mike Bugarski (1936-1992) was a club coach, National Official, Provincial Official’s Chair, clinician, and high school coach. He was a volunteer that unselfishly contributed thousands of hours to the development of athletes and leaders in the sport for more than two decades. 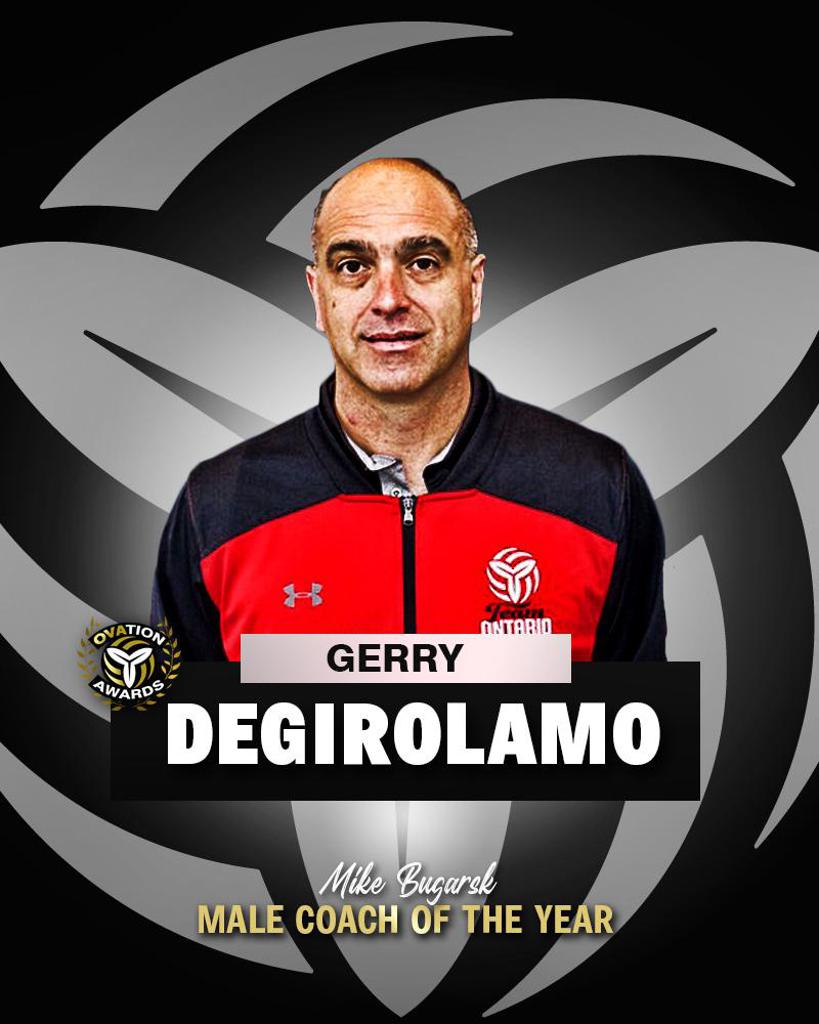 Amy Wilson-Hands continues to be a positive influence and passionate advocate for Indigenous volleyball development in Ontario. With over ten years of coaching experience at the elementary, secondary, club, high performance and university levels, she has settled into her calling and has left her mark in the communities where she taught.

Most of Amy’s coaching career has been centred in the province’s Northwest, a section of Ontario which is sparse for volleyball opportunities when compared to the other five regions. Amy quickly found herself as one of the key mentors and volleyball personnel in her community, becoming involved in as many opportunities as she could when she started. In the Summer of 2007, Amy co-founded the Fort Frances Vipers Volleyball Club and would spend eight years there before co-founding a second club, the Fort Frances Fire ‘n’ Ice in 2015. Committed to teaching the fun of the game, Amy implemented the Spikes FUN-damental camps at her clubs where her players learned the importance of communication, safety, leadership skills, respect and good sportsmanship.

In 2016, Amy took the role of Head Coach for the Treaty #3 Titans 18U team. This team would provide an opportunity for Indigenous youth from all over the province’s Treaty #3 to participate in the Ontario Native Volleyball Invitational in Sault Ste. Marie. Amy would return as Head Coach in the subsequent years and compete in the Invitational with the 18U Tigers and then 18U Blue Thunder, emerging with bronze and gold medal finishes in 2017 and 2018.

Around the same time when the Fort Frances Vipers Volleyball Club was established, Amy was doubling her coaching duties in the Northwestern school system at both St. Francis Elementary School and Fort Frances High School. Between 2006 to 2017, Amy took the reigns for multiple boys and girls teams from grades seven through twelve where she taught the volleyball essentials and made daily practice plans. Her tenure at Fort Frances was highly decorated with Amy guiding her teams to seven NorWOSSA High School Championships (two gold and five silver medal finishes).

Amy was then brought into the high performance fold in 2016 as the Head Coach for the Region 1 team competing in the Ontario Summer Games. She would develop her skills as a high performance coach at the helm of the Aboriginal Team Ontario competing in the North American Indigenous Games in 2017 and as the Aboriginal Apprentice Coach for the Team Ontario Women’s Canada Games squad. In 2018, she would return to the drivers seat once more for the Region 1 team at the Ontario Summer Games.

After a long tenure in the North, Amy would move to the GTA and coach one season for the Mountain Volleyball Club before transitioning to the Pakmen where she currently leads the Pakmen Gold Girls. She continued to pursue her experiences in Team Ontario with the Red program and later Team Ontario Elite, both in assistant coach capacities. More recently, Amy accepted an Assistant Coach position with the University of Waterloo women’s varsity program and expands her knowledge in the post-secondary ranks.

In the past year, Amy has made sure to keep her team motivated and connected throughout the extended lockdown of the GTA. Hosting weekly virtual team bonding meetings, arranging for yoga instructors and strength and conditioning coaches, Amy holds her team accountable through digital learning and participation. Keeping true to her roots and advocacy for Indigenous and volleyball development in the Northwest, she has also connected her team with the 807 Select Volleyball Club and created a mentorship program. The program involves the Pakmen girls are mentoring the 807 girls who are new to the sport and do not have the same access to training and competition due to location.

Thank you for all your hard work over the many years of coaching and congratulations on winning the 2021 Sandy Silver Female Coach of the Year Award! 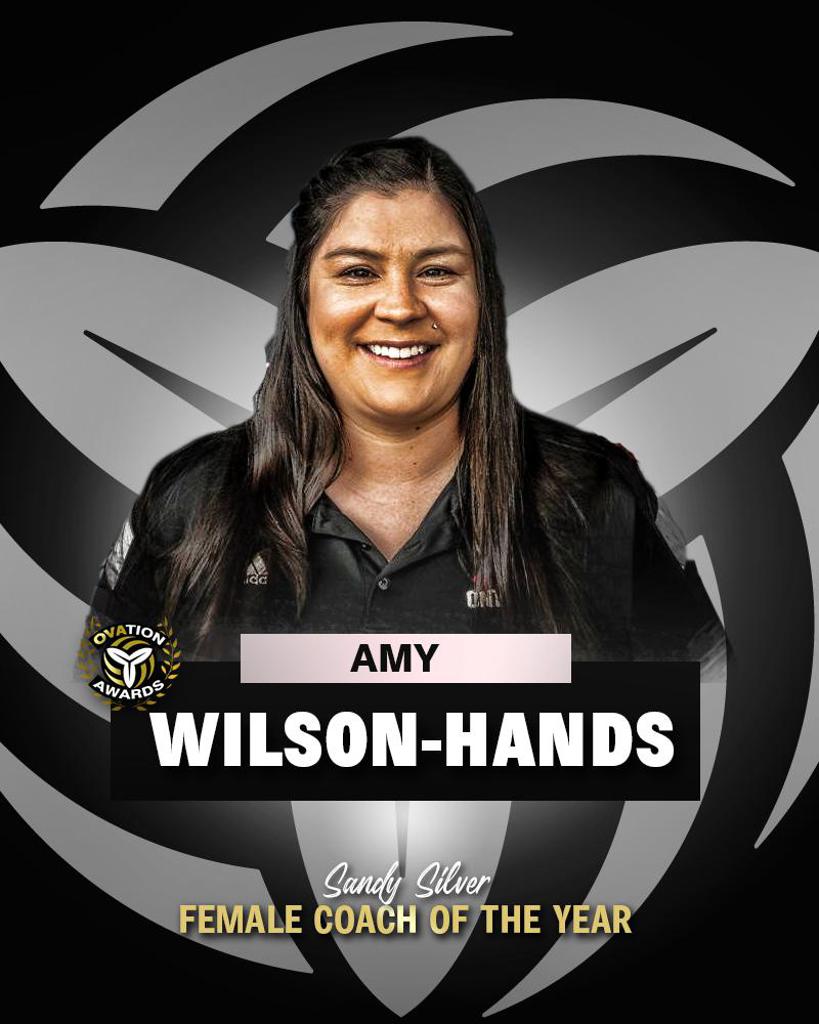