The Ontario Volleyball Association is pleased to announce Holly Biasi as the winner of the Association's most prestigious award for a youth female volleyball player in Ontario the Evelyn Holick award. This award is presented annually to a female youth division athlete in recognition of outstanding commitment, dedication to the sport of volleyball, leadership, sportsmanship and athletic ability, all characteristics of the award’s namesake.

Holly Biasi was on the fast lane for an outstanding career in swimming. A nine-time Swim Canada provincial champion in the 50m freestyle (highlighted by a second place National ranking), 100m freestyle and butterfly, the Storm Volleyball standout ultimately made the commitment to the hard court and sand when she was at her apex in the pool. To those who know Holly, she was bound to thrive regardless of the sport because that is her mentality. Among the other sports that Holly has balanced include basketball and flag football.

With the edge of focus fixed on volleyball, her work ethic sent her on a steep upward trajectory. National and Provincial Championships ensued and representation on Team Ontario Elite added to an already impressive Club career. But besides the dedication to herself on court to reach success with Storm and Team Ontario, it’s the dedication to her teammates, up-and-coming athletes and community where her love of volleyball and sport truly shines.

Volunteering with her Club’s developmental program, the Storm League and younger rep teams have made this 90% student somewhat of a role model, though she might not know it. In school she is a peer mentor, helps coach the junior boy’s basketball team, actively volunteers for sport events and serves on the Athletic Council. Always the biggest cheerleader when she’s on the bench, Holly finds joy in seeing the success of others and will be the first to offer support and care for both the physical and mental health of her teammates and friends.

Her passion for the sport of volleyball and natural ability to get those to rally behind her can be articulated by nominator and coach, Gerry DeGirlamo, who first took notice of Biasi when she was in the seventh grade on the opposing team. Biasis’s teacher/coach told DeGirolamo that she was the best all-around athlete that he had ever coached.

“I have been fortunate to see Holly as an opponent and as an athlete on both club and high-performance teams in both volleyball and other sports and it is evident that other athletes and coaches turn to her and follow her,” said DeGirolamo. “Leaders are not selected; they emerge through their actions and abilities. She is a leader because of the way she communicates with teammates and coaches, competes, encourages and motivates others, and her ability to see who needs what, at what times, and her willingness to do everything in her power to make whatever that is, happen. She does not actively pursue leadership...it is who she is.”

To view the full interview with Holly, please click on the link below or visit the OVA’s YouTube page. 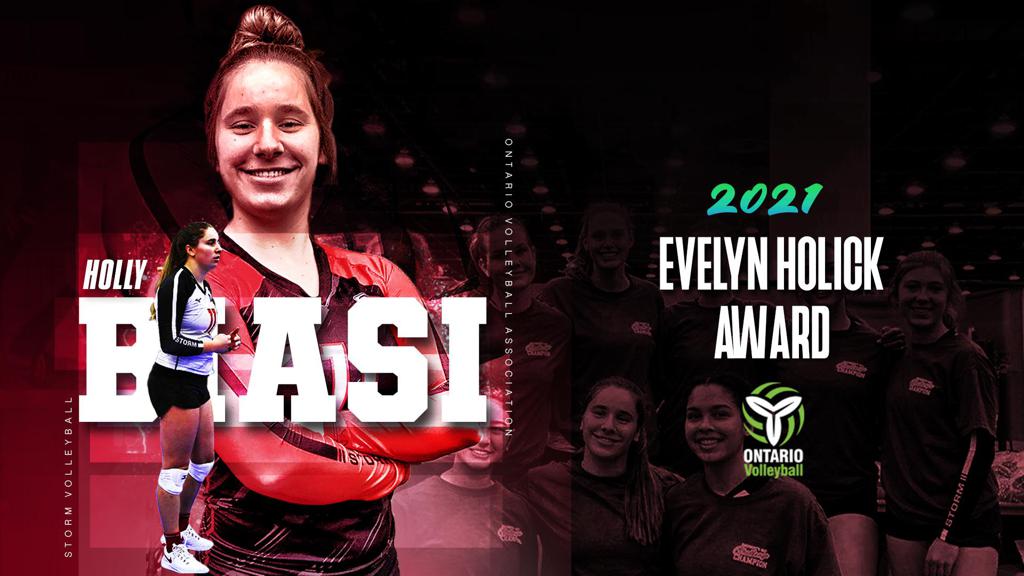