The Ontario Volleyball Association is pleased to announce Nicolas Folz as the winner of the Association's most significant award for a youth male volleyball player in Ontario; the Ken Davies Memorial award. This award is presented annually to a nominated male athlete from the 18 and under division who encompasses the characteristics of the award’s namesake, including determination, leadership, sportsmanship and fair play, on-court talent and accomplishments, as well as their injection of spirit and compassion within the community away from the court. This award recognizes the complete player and person.

Folz is a student of the game; the middle boasts an impressive skill set on the defensive and offensive, is ever curious of volleyball and incredibly respectful of the rules in which he plays. Known for his integrity on the court and having the utmost respect for his opponents, Folz is the type of player who has been observed telling officials that he touched a ball, despite it not being seen by the officiating team and giving the point to the other team. Coaches from opposing teams have noticed this kind behaviour and have made it a point to thank him for his honesty and sportsmanship at the end of the match.

Nominated by coach Corey Wilcox, Nicolas’ commitment and curiosity of the sport has helped in his overall refinement and understanding of off-the-court perspectives.

“Nico has been playing volleyball since 13U and has been looking for every opportunity to be involved in the sport since then,” said Wilcox. “He comes to every practice looking for feedback and opportunities to improve. Nico also played for his high school (Franco-Cité) and became a local volleyball official in order to improve his knowledge of the game and help his teammates understand an officials point of view. He also started coaching, as an assistant with his middle school, to give back to the game.”

This constant drive for self improvement has not come without a tall list of accomplishments. A member of Maverick Volleyball and Team Ontario Elite, Nicolas has garnered an impressive collection of hardware and honours throughout the seasons and recently, has committed with the Western Mustangs to pursue his undergraduate degree in engineering as a student-athlete in the USports system.

The Maverick middle has naturally grown into a leader and is the one to go to late game situations when vying for the final points. His sensibility and sincerity to help transcends the technicalities of the game and into activities off court and academics.

“Nico has helped his teammates off the court by checking in with them to see how they were doing academically and offering to help them in subjects that they wanted to improve in,” said Wilcox. “He also pushed his teammates to work harder in the weight room to improve their odds of becoming post secondary athletes.”

His goodwill extends even beyond the team and into the youth’s hometown. In what has been a challenging year for athletes across Ontario, Folz was ready to step up to the plate to make a positive impact across his community through food donations. Taking the initiative upon himself he organized a food drive to help families that were negatively impacted by the pandemic’s restrictions. Driving to homes across his community to collect donations, Folz dedicated over 150 hours of community service for the cause.

Congratulations Nicolas on your well-deserved recognition as the 2021 Ken Davies Memorial award recipient.

To view the full interview with Nicolas, please click on the link below or visit the OVA’s YouTube page. 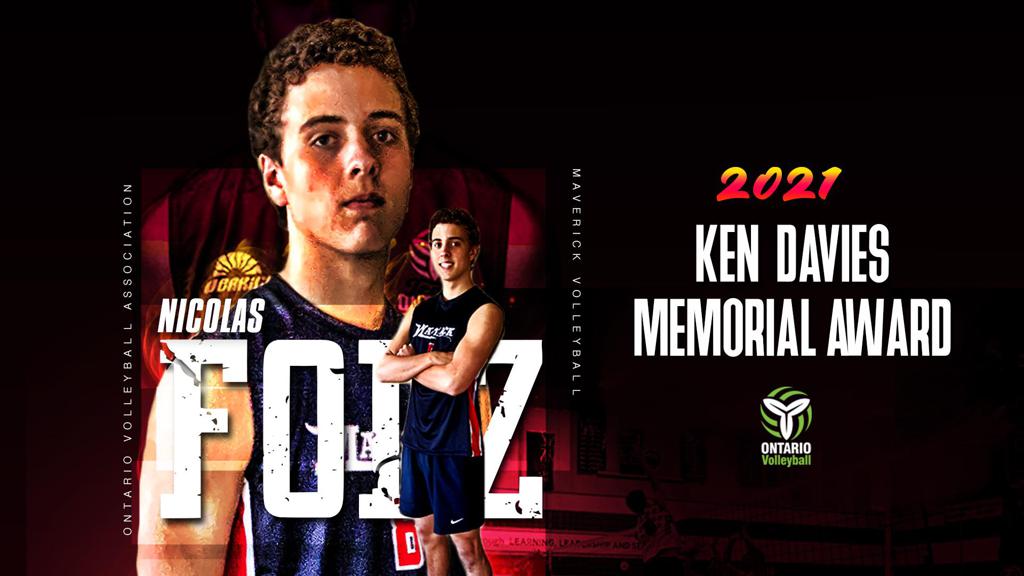