Getting Back in the Game: How to Safely Return to Full Potential (ft Dr. Josh Binstock)

We are in the thick of summer. The pandemic is still a reality; however, the province of Ontario has progressed to a point where it has been deemed safe enough for pieces of pre-COVID-19 normalcy to re-enter the fold in a modified capacity that still places large emphasis on physical distancing and frequent sanitization. For us in the volleyball community, it means that our sport can once again be enjoyed as we are able to physically train and enjoy exhibition play. It is a highly anticipated and welcome return as we are seeing beach volleyball leagues being offered across our province with many opting to participate.

Some of these athletes have been off the shelf for months now –probably the most they’ve ever been away from the sport since they started to play the game. With beach volleyball season in (what would be) it’s peak and events re-sprouting in Ontario, some indoor athletes have decided to unlace their shoes and step barefoot on the sand; some for the first time.

It’s an exciting time, to say the least. After such an extended period refraining from a level of activity that was typically a part of their biological clock, it’s good for the athlete to finally get readjusted to the sport, both from a physical and mental perspective.

While they may be quick off the draw to be reunited with their sport by signing up for a beach event, it is important to understand that the beach game is different in some capacity and there is potential for some mishaps if not played with caution and an understanding of the new environment. That being said, the softer terrain could also be beneficial for those looking to return and prep their bodies for indoor and if there is someone who can provide their expertise on these matters, Olympian and chiropractor Josh Binstock is a qualified candidate. Not only is Binstock an accomplished beach athlete but former indoor volleyball player as well, having competed for the University of Toronto Varsity Blues and the Canadian Junior National Team.

“It’s twofold for why it would be beneficial for these kids just to get back on the beach. For one, just getting active again and getting your jumps in because what I do foresee – for any sports, if they’re off for a prolonged period of time – is that it’s going to be tough because you can’t prep your body for the loads you’re about to be under; especially indoor because when you’re landing on the hard court it’s less forgiving so your joints absorb the forces. Compare this when you’re on the beach when you land on the sand, the force is dissipated through the sand.” - Josh Binstock

The beach setting, he adds, is the perfect transition for athletes to get reacquainted to the game as movements (such as including jumping and landing) allow the muscles, joints and nervous system to familiarize and adjust without feeling the impactful loads of the hard court. He compares the setting to the rehabilitation progression where one slowly eliminates the padding, eventually returning to the environment one was at in their peak.

“Even working on your skills, you still have the high snap, you’re still setting and passing – all the fundamentals are the same so you’re still prepping your skills to execute at a farther level as well,” Binstock says. “To be honest, it’s so much harder to move and jump on the beach so once you get used to that, once you’re inside it will feel like you’re flying!”

The ways in which beach volleyball is played could also be beneficial when bringing your game back indoors he notes, indicating that the use of your platform becomes greater as it’s constantly challenged in the sand and the ground one has to cover makes for highly skilled footwork. On defense, an attitude is gained when diving for the ball is a guaranteed near constant; the comfort of the sand, he finds, sparks confidence in the athlete’s ability to make the save. The range of your passing can also be improved since there is only one person the ball can go to and the beach forces one to underarm pass more frequently – a skill that can bolster any athlete’s volleyball passing repertoire. Binstock goes on to mention that the playing surface and outdoor environment puts beach athletes in frequently compromised positions when attacking and therefore are continuously learning to be dynamic in their approach and contact. 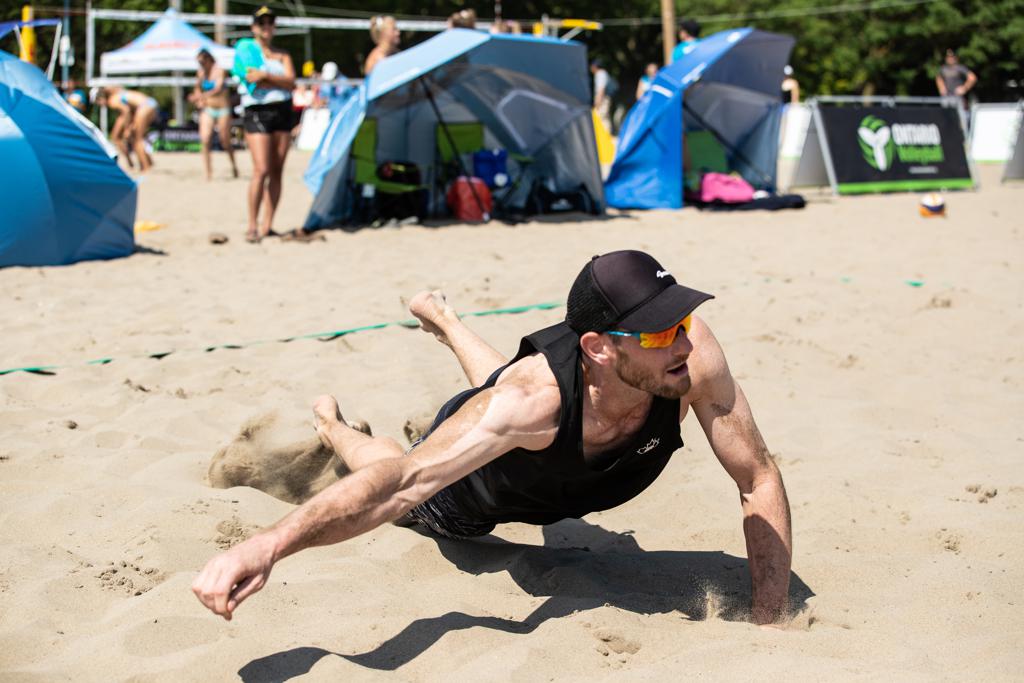 Binstock competing at the 2019 Beach Ontario Championships at Ashbridges Bay.

“A lot of the California teams that do beach club dominate indoor because they do beach with the athletes in the summer as a way to not get burnt out by playing indoor all year round,” he brings up retired American beach volleyball player and Olympian Holly McPeak and the success of her club. “It’s still a way for the players to have those touches, have those reps and stay in shape.” 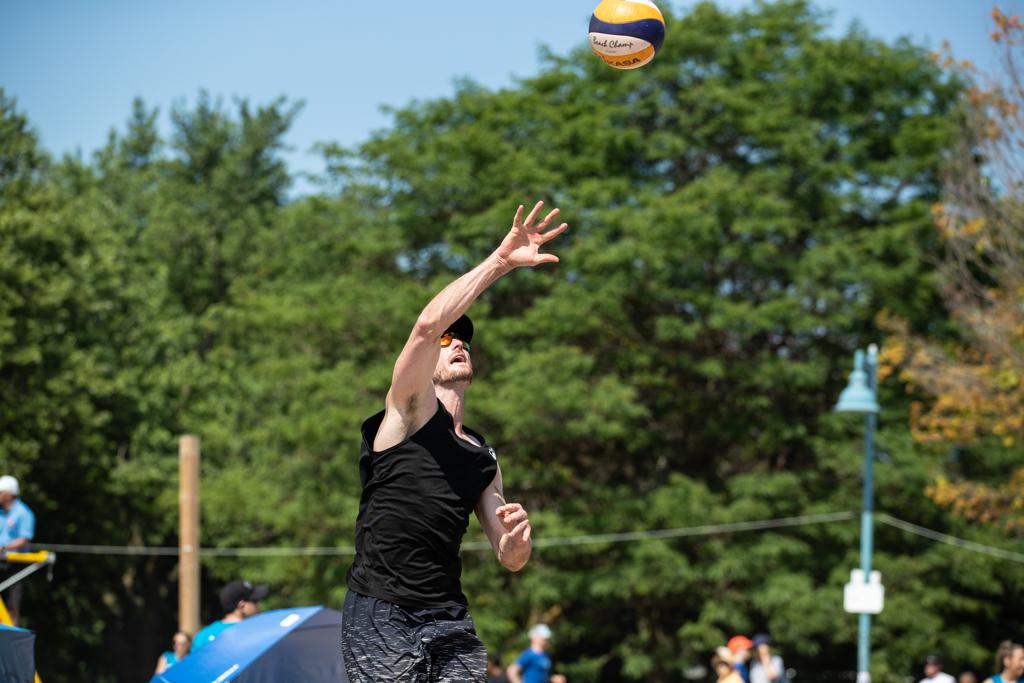 Slight changes such as shifts in the wind and the uneven ground can cause the athlete to frequently alter their body when serving or attacking. These changes can impact negatively impact the body.

As alluded to earlier, if an athlete is fresh to beach volleyball they are getting used to a new environment and certain miscalculations can occur. You might think that the uneven ground  poses the largest threat to a new beach athlete, but as Binstock stated before the sand's cushioning is can be useful for ankle/lower body rehabilitation. Instead, he foresees the shoulder area becoming an issue.

“What I do see is that usually with indoor the setter is putting the ball in a pretty consistent spot and the attacker can usually start their approach knowing the general descension of the ball and where it’s going. In beach, the sets that attackers deal with are much less accurate and that can cause issues because now you’re not hitting with the proper biomechanical swing (like we teach kids how to swing at one o’clock because it’s always in front of you) but now a lot of kids are making contact behind their head and that puts a lot of strain on their shoulders so they could have issues with those ligaments.”

He includes that lower back problems can arise as well.

“One of the biggest discipline struggles with new athletes on the beach is that they come in so early because they’re too eager to hit after they passed but because the sets aren’t as accurate – sometimes they’re too high or too off the net – now they’re in early and have to pike back so they’re attacking the ball behind their head and also bending backwards more than they ever would which can compress their lower spine.”

Binstock advises athletes to focus on strengthening and stabilizing these areas in order to minimize the toll the body takes should it find itself in the scenarios described above. He also recommends that athletes watch their load management, regardless if they’re in beach or indoor settings – too much is not always better.

Below are examples of exercises that an athlete can perform to help prep their bodies for beach or the upcoming indoor season.

Josh goes over certain exercises one can do at home that focuses on strengthening and stabilizing the ankle. Exercises include:

Josh explains the importance of having good lumbopelvic control which can help when absorbing landings and prevent low back issues. Exercises include:

When jumping, it's imperative that an athlete has good stability and control through their hips. Exercises include:

Josh goes over shoulder exercises that will help athletes prepare for setting. Exercises include: 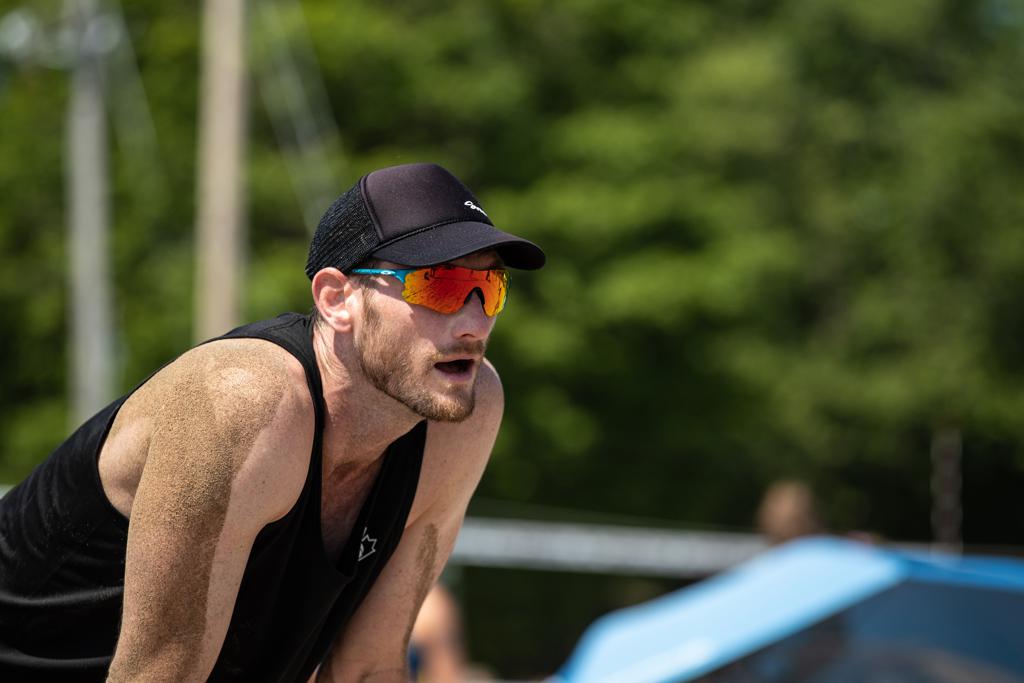 Dr. Josh “Binner” Binstock is a two-time beach volleyball Olympian (2012 & 2016) from Toronto, Ontario. On the beach, Josh has enjoyed and achieved national and international success. This includes several Canadian National Championship victories, competing on the FIVB World Tour (where he has stood on the podium four times) and claiming a gold and silver medal at the Maccabiah Games in 2013 and 2017, respectively. Outside of volleyball, Josh is a Doctor of Chiropractic where he graduated from the Canadian Memorial Chiropractic College – a career path shared by his uncle. He is currently the Director of Recovery and Clinical Operations at Aethos, a wellness and performance clinic located in Toronto. Josh is also a proud OVA Ambassador.