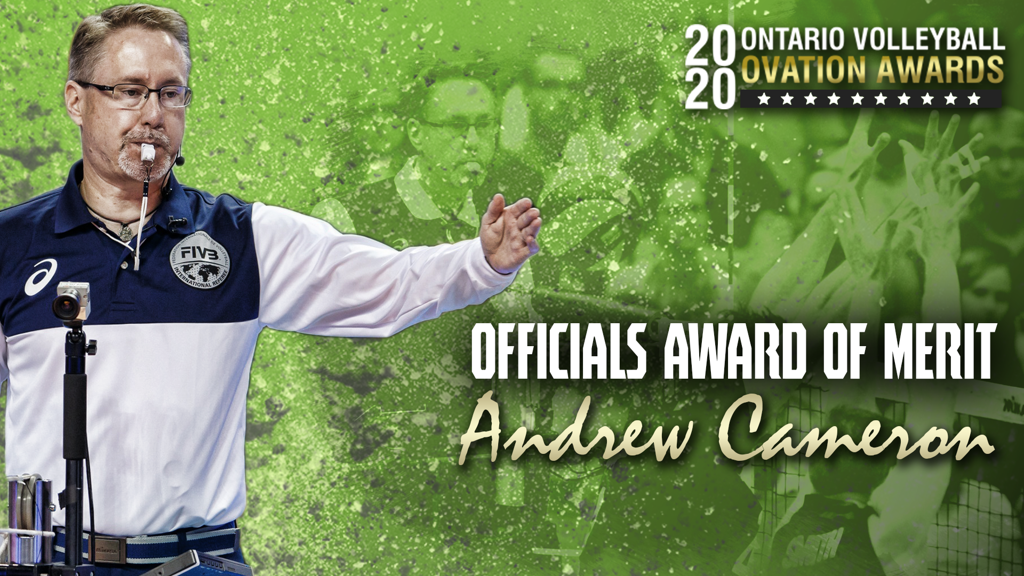 For the past 33 years, Andy Cameron’s efforts in the community have benefited the growth of officiating in Ontario and throughout the nation. Working as a referee since 1987, he climbed the ranks before earning his international level referee status in April 2011. Throughout his career, Andrew has officiated at all levels of domestic competition including USport (formerly CIS), the Canadian Collegiate Athlete Conference (CCAA) and Volleyball Canada’s National Championships.

His highlight reel of events is impressive including roles as 1st Referee for the gold medal at the Men’s Ontario University Championship, 2nd Official in four CIS Men’s National Championships, and 1st Official for the gold medal match at the CIS Women’s National Championship. Andrew attended the FISU World University Games in Belgrade, Serbia where he was assigned to the women’s quarter-final match between Serbia and China, and again in Napoli, Italy in 2019. In 2016 he also represented Canada at the FIVB World Grand Prix event in Peru and was nominated to represent Canada at the Tokyo Olympic Qualifier in 2019. He has also dedicated his time with Volleyball Nations League.

Off the court, Andrew has held various positions with the Provincial Referee Committee. His most recent posts come by serving as the Chair of Referee Operations (ROC) for the Provincial Referee Committee and the Regional Official’s Committee and OUA/OCAA/OVA referee assignor for Region 6. He is also a certified Volleyball Canada Referee Supervisor, a was previously a member of the Volleyball Canada finance audit committee, and was the Ontario Regional Referees Chair, a position he most recently stepped back from after 10 years of service. He has also dedicated his time to the development of the OVA Referee Engagement Centre platform.

Andrew’s work with the National Official’s committee has contributed to the growth of officiating in volleyball throughout Canada. He can be credited with the improved communication channels between officials and coaches at the post-secondary level as well as within the officiating community. Andy continues to work diligently to have Ontario well-represented at National Championships and is a great representative for the province, ensuring officials in Ontario are well-respected by their colleagues on whatever stand they may find themselves on.

About the Officials' Committee Award of Merit

Established in 1998 and presented by the Officials' Committee in recognition of dedicated service to officiating in Ontario. The nominee must demonstrate dedication, skill, an affirmative attitude and be recognized by their peers as having a positive influence as a certified OVA Official.