The OVA is proud to announce Anna Licht (University of Toronto Varsity Blues) Mitchell Neuert (Queen's University Gaels) as the recipients of the Scarborough Solars Award. The Award is presented annually to a minimum of two Ontario athletes (equal number of male and female athletes) who have been selected to, or who have the ability to, represent Ontario and/or Canada in international indoor or beach volleyball competitions. With the purpose to assist Ontario athletes to pursue their volleyball objectives, the award provides no more than $1,000 or no less than $500 per athlete, per year (one (1) female & one (1) male).

Anna Licht began her volleyball career in 2010 with humble beginnings, gracing the courts of the Scarborough Titans Volleyball Club’s house league program while sparking a passion that would only burn brighter as she progressed in the game.

After two years of soaking up the grassroots volleyball atmosphere, Anna turned her focus to developing her game with higher calibre players, transitioning into the Titans rep team program where she would compete for her 16U-18U years. During that time, she also fostered a love for beach volleyball game which she began playing in the summer of 2014. It was there her true passion, beach volleyball was found and stoked, playing in as many tournaments possible and with whenever she could partner with.

After completing her youth career, Anna would graduate to the varsity ranks, continuing her play with the University of Toronto Varsity Blues program and crossing paths with one of Canada’s beach volleyball pioneers in Kristine Drakich who would continue to fuel her desire to excel on the beach. Her new head coach describes Anna as one of the hardest working and dedicated athletes she has ever coached. She also describes her as a ‘late bloomer’ who began seriously focusing her attention on volleyball when she arrived at the university level.

A late start in volleyball did not correlate to being left behind in the game and she quickly made a name for herself within Ontario University Athletics (OUA) league. Anna was named a three-time OUA All-Star and helped her team win three OUA championships, including back-to-back championship titles in 2019 and 2020. Her dedication and leadership also earned her team captain status from 2018-2020, adding to her formidable post-secondary career resume.

In 2020, Anna’s focus has narrowed following a selection to Volleyball Canada’s Beach Summer National Team Program. It is this training ground where she begins the newest leg of her journey, following in the footsteps of her Varsity Blues coach, and excitedly represent Canada in beach volleyball. With the recent success of the women’s beach volleyball program, it is Anna’s goal to ascend the ranks and earn her way into the Olympic Games while representing the Canada on global stage.

“It would be a privilege to pursue my goals with the support from the organization that introduced me to volleyball,” said Licht of earning the Scarborough Solars Award. Congratulations Anna! 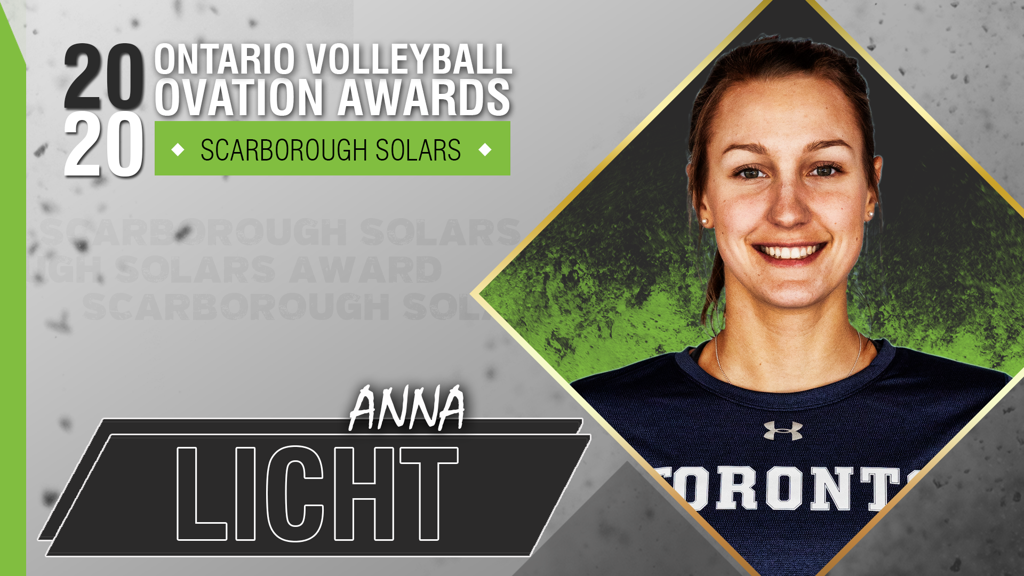 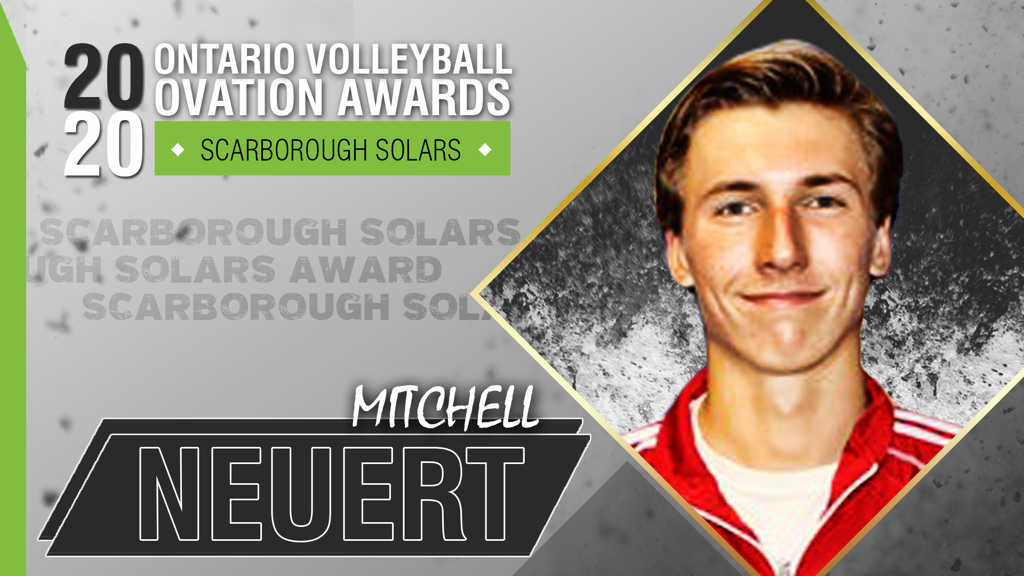 Focusing solely on one discipline to be the absolute best is the path most taken in volleyball, but Mitchell Neuert has bucked the trend, fulling wading into the high-performance waters of both the indoor and beach games. His consistency and dedication in each discipline began at 13 years-old and has continued to progress, allowing his games to evolve both in the sand and on the court.

Neuert navigated the Athlete Development pathway throughout his career playing for Team Ontario Indoor and Team Ontario Beach where he was a member for three consecutive years for the latter program. His physical attributes and commitment to all aspects of training and attentiveness did not go unnoticed by coaches.

“I have experienced firsthand the benefits of the developmental programs which has allowed me to continue developing my knowledge and passion for the game under great mentorship from inspirational and influential coaches,” says Neuert of the learning experience.

With the recognition of talent and work ethic on the beach, the six feet six-inch-tall Toronto native earned an invitation to Volleyball Canada’s National Beach team as a member of their summer program. With one FIVB international beach tournament under his belt, Neuert is seeking to compete on the continental tour circuit, gaining crucial ranking points and international experience on his pursuit to represent Canada at the Olympics.

He currently attends Queens University, playing for the Golden Gaels team and on track to earn his undergraduate degree in kinesiology. Neuert recently and recently completed his third year and has earned an Ontario University Athletics (OUA) All-Rookie team selection, an OUA silver medal in 2018 and back-to-back OUA Championship titles in 2019 and 2020.

Neuert has been cited as a great role model with his integrity, hard work, and an ability to self-evaluate, firmly engrained. A caring individual, he continues to contribute to the quality of the high-performance training environment in Ontario. The OVA is proud to award Mitchell Neuert as a recipient of the Scarborough Solars Award! Congratulations Mitchell on the honour!