A Taste of the International Stage: The Athlete Development Journey

Long before we see the athletes on volleyball courts at the Olympic and Paralympic Games, there are people across Ontario who are fine tuning their skills and enjoying their favourite sport at all levels of proficiency and ability.

Are the Olympic and Paralympic Games important to the growth of sport? A resounding ‘Yes!’ would be the answer.  According to Mark Eckert, president and CEO of Volleyball Canada, “we have seen five to seven percent increase in domestic participation after we compete in an Olympics, which has immeasurable social and economic impact.”

The fact that the Games are an inspiration to the next generation of possible Team Canada players is one thing but being able to see a post-Games boost financially and in awareness is another. If a sport and its athletes are to succeed, there needs to be opportunities for younger athletes to learn how to compete on the international stage.

OVA athlete teams from indoor and beach volleyball have just such an opportunity coming up during March Break, with camps happening in Poland for the boys and France for the girls for indoor volleyball and in Spain for beach volleyball.

"During the Olympic and Paralympic Games, I am as much of an 'uber' fan as anyone else when it comes to Volleyball and the Canadian team. Away from the TV, I think about those Olympians and Paralympians and where they must have started on their road to representing Canada. That is where Ontario Volleyball comes in and the experiences that will be afforded to some of those young athletes during the March Break Camps,” said Jo-Anne Ljubicic, Executive Director, Ontario Volleyball Association.

There will be four coaches headed to Spain with the Beach Volleyball athletes. “All of the athletes were a part of the 2019 Ontario Beach Provincial Team. There are 12 female athletes, and seven male athletes and we’ll be training at and with the Spanish Youth & Junior national teams,” said Angie Shen, Senior Beach Development Coach, Ontario Volleyball Association. “One of the main activities that we have in Spain is a conversation around the pathway and what that looks like towards the Olympics. This conversation tends to be easier to have with our athletes when they are there, as they start to see the hard work that is necessary. The Spanish athletes live, train and go to school at an academy. They (the Spanish athletes) have moved away from home and they are of the same age as our high school kids, which is an eye-opener for them.”

Liam McArthur is on the boys’ team headed to Poland and plays for Pakmen but was developed at Scorpions and LVC.  “Being one of the few athletes selected to travel overseas definitely does boost my confidence. Being able to play and keep up with athletes that come from one of the winningest volleyball programs in the world also results in an adequate confidence booster as well,” said McArthur.

Every journey starts with a single step and if the Games is where an athlete wants to go, then carefully planning those steps is vital. Big picture, there are hopes pinned on the Olympic Women’s Beach Volleyball team headed to Tokyo. “In general, increased success on the world stage, such a medal strong medal hopeful this year in our women’s beach program, can only have a positive effect on the growth of the sport, including future economic benefits,” said Eckert. 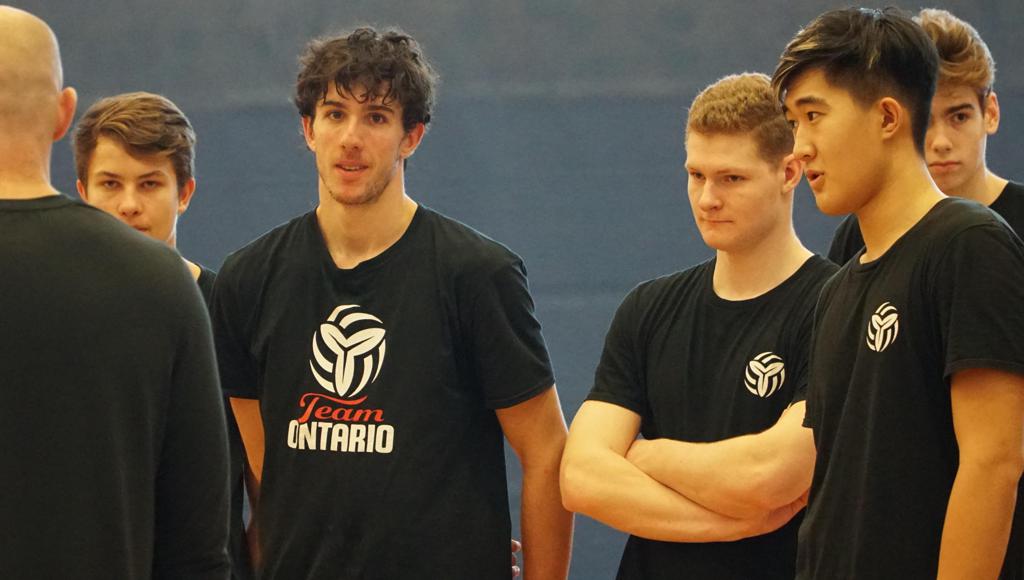 McArthur (third from left) at one of the Team Ontario Elite Training Camps.

Closer to home in Ontario, the importance of these early international competitive opportunities for developing athletes cannot be over-stated. If experience is the best teacher, then it would stand to reason that the more experiences, the better.

For some of the March Break Camp participants, it will be their first time on the international stage not to mention the first time out of the country.

Being able to ‘walk the walk’ offers a unique perspective in coaching these young athletes. Louis-Pierre Mainville, Director of Athlete Development for Ontario Volleyball Association, is headed to Poland as a coach and recalls his own international experience: “ I was once a 17-year-old player with aspirations to make it to the National Team and I was lucky to achieve that goal through the support of fantastic coaches. I can’t think of a better way to create meaning in my professional life to offer the same support to today’s 17-year-old players.”

There are pluses for athletes and coaches alike headed abroad from Ontario Volleyball for the March Break Camps. “Coaching for the full week and doing so in a country like Poland that is the centre of the volleyball world right now on the men’s side. My day to day work is on the administration side of the sport so I look forward to putting my coaching shoes on with this great group of guys for a week,” said Mainville. ”We will attend the semi-finals of the Polish Cup in a 13,000-people stadium. That will be pretty special too. I think ultimately, I’m looking forward to seeing the boys being challenged and impressed and then seeing them adapt and grow.” 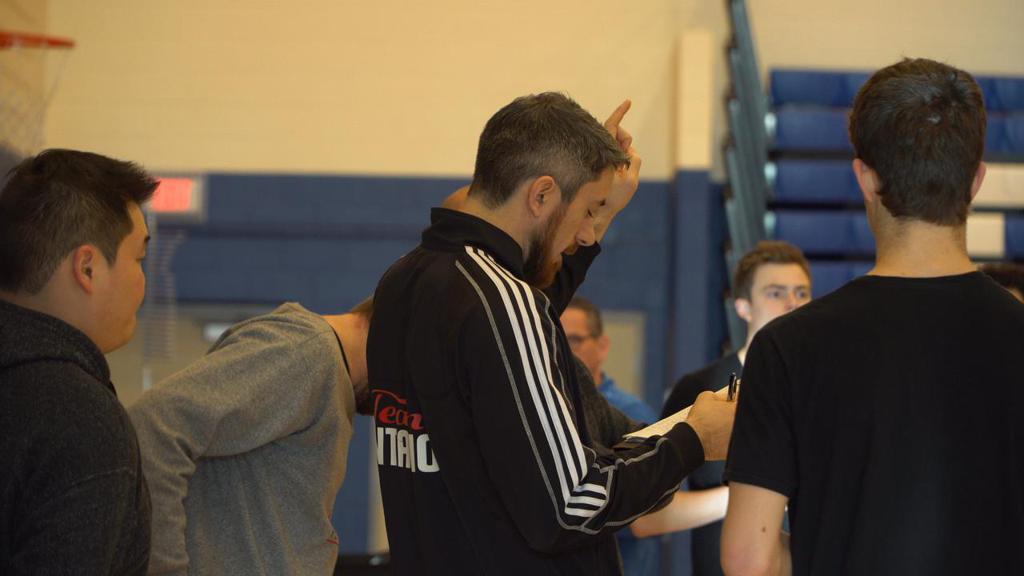 There is something special for a coach like Mainville to be re-experiencing international volleyball through the lens of athletes for whom much will be new. The same can be said for Lauren Breadner, Athlete Development Lead for Ontario Volleyball, who will be in France with the girls’ team. “It means a lot to be involved with athletes at this stage of their development. The Team Ontario Elite program is the last program in our OVA athlete development pathway before the athletes ‘graduate’ from the OVA and move on to other programs in the varsity, national team, etc., …streams.”

It is the ‘development’ in ‘athlete development’ that inspires some of the efforts that have gone into making the March Break Camps happen. “When the (female) athletes go to France, they will be training at the CREPS facility in Toulouse which is the home of the France Youth National team. We are training alongside them, not so much competing against them. We will have some friendly matches, but these will not be results focused,” explained Breadner. “The athletes will hopefully take away more knowledge on how the game is played at an international level, like the faster pace of offense, different offensive tactics and systems, the heavier/stronger serves, etc. The athletes will be able to apply this knowledge in their next volleyball journey at the varsity level and hopefully one day Team Canada.” 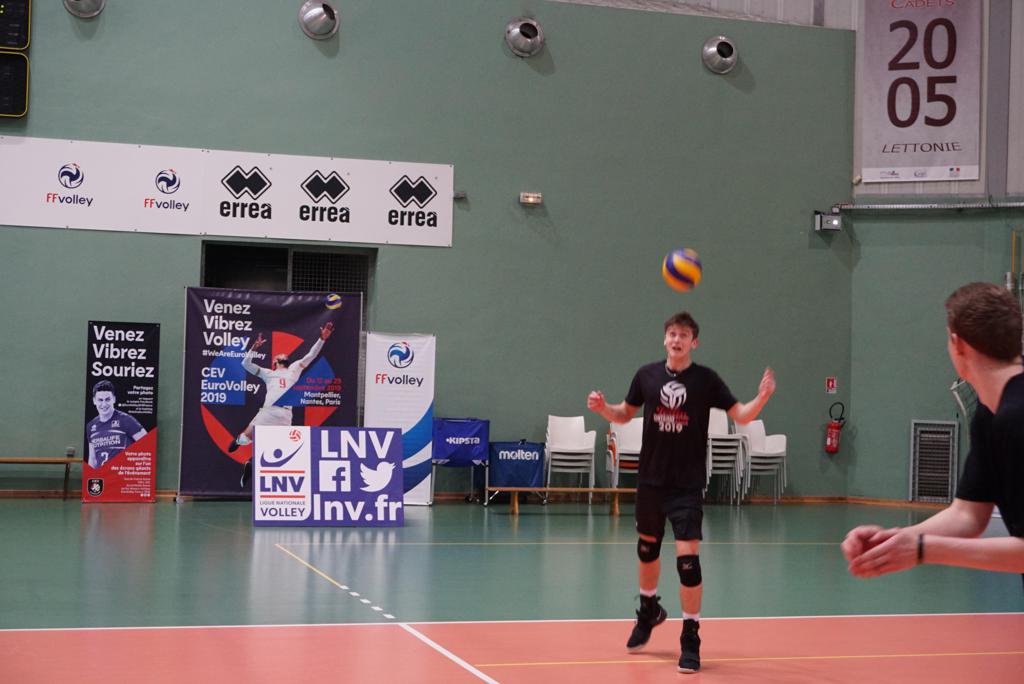 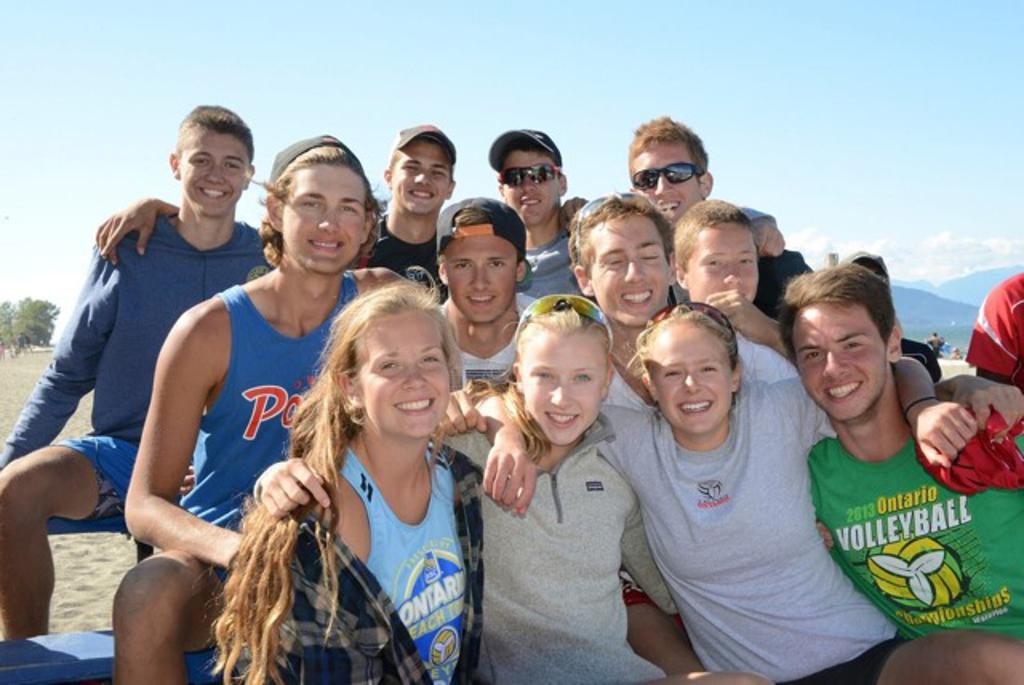 The Beach squads head for Spain once more. In 2019, they took flight to Lorca in the south-eastern part of the country.

Team Canada and volleyball is where we started in this piece. “Qualifying and competing in the Olympics and Paralympics not only brings exposure to the sport, it also proves to our sponsors and funding partners that their investment is paying off,” concluded Volleyball President and CEO Mark Eckert.

The development of Ontario athletes at the Provincial and club level is where it all begins.