With the Tokyo 2020 Olympic and Paralympic Games just around the corner, it comes down to a few remaining qualifying events for athletes and teams to claim their spot to represent Canada in their sport.

In the case of sitting volleyball, the Canadian women’s team is hoping to punch their ticket at the upcoming Tokyo 2020 Women’s Final Paralympic Qualification Tournament in Halifax, Nova Scotia, from February 25 to 29, 2020. Women’s sitting volleyball made its first appearance at the Paralympic Games in 2004 in Athens, and Team Canada’s women qualified for the first time at the Rio 2016 Games and are looking to see history repeat itself later this month.

Anne Fergusson, a member of the Canadian squad from Ontario, sees it this way: “Qualifying for the Paralympics would mean so much to me and our program. Personally, a chance to compete at the Paralympics has been a goal for so long and such a huge accomplishment in sport. Our team has been gaining so much momentum and there is nothing like competing at that level and at such a large event. The Games are a great opportunity to bring attention to our sport.”

Canada’s men will also be looking for a Tokyo berth at their own sitting volleyball qualifying event at the Tokyo 2020 Men’s Final Paralympic Qualification Tournament, which will be held March 16 to 21 in Edmond, Oklahoma. For both teams, these events are a last chance qualifier and there is only one Paralympic Games spot up for grabs and they must win their event in order to capture that berth.

“Qualifying for Tokyo would be an amazing accomplishment for not only myself but also my teammates. Since I became a member of the Sitting Volleyball team in 2014, we have always talked about reaching the next level and representing our country at the Paralympics.  We're heading into our last chance qualifier in a month and we all understand what is at stake here, its win or go home,” said Team Canada men’s team member Jesse Buckingham.

In a world that continues to try and advance the concept of ‘sport for all’, sitting volleyball has become an important cornerstone in the Paralympic movement. To understand just how this sport has impacted the Canadian sports landscape, we need to go back to the beginning.

In 1986, Canada launched their first formal disabled volleyball program through the Canadian Amputee Sports Association. It wasn’t until 1998 that Volleyball Canada integrated disabled volleyball into its programs through a memorandum of understanding with the Canadian Amputee Sports Association. A working group with the same rights and responsibilities as other groups within Volleyball Canada, such as Beach Volleyball for example, was created to start looking at how to progress the sport. 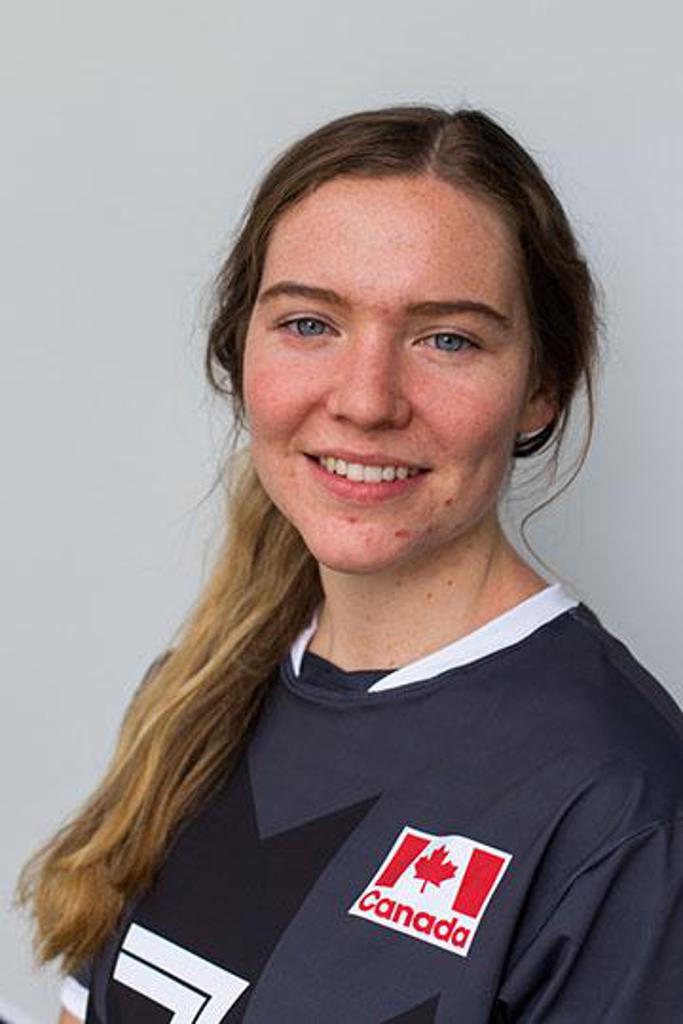 Fergusson made her national debut in 2015 at the Parapan Am Games in Toronto. The Carelton Place resident would also help the women's team qualify for the 2018 World Championships. Photo - Volleyball Canada

Before sitting volleyball, there was standing volleyball where Canada’s men were among the best in the world winning three back to back world titles in 2002, 2004, 2006 and a silver Paralympic medal in 2000 at the Sydney Games.

The Canadian men’s team has yet to qualify for the Paralympic Games, but this could all change in March.

“Winning this tournament and qualifying for Tokyo is not only a positive for myself and my teammates, but for anyone who plays sitting volleyball in Canada. When an individual or team is able to do good things in their sport, people pay attention and take notice,” said Team Canada player Jesse Buckingham. “When our women's team qualified for Rio in 2016 there was a buzz around the sport that I have never experienced before. With a Paralympic berth this summer, we are looking to create that same energy and bring the attention back to sitting volleyball all around Canada.” 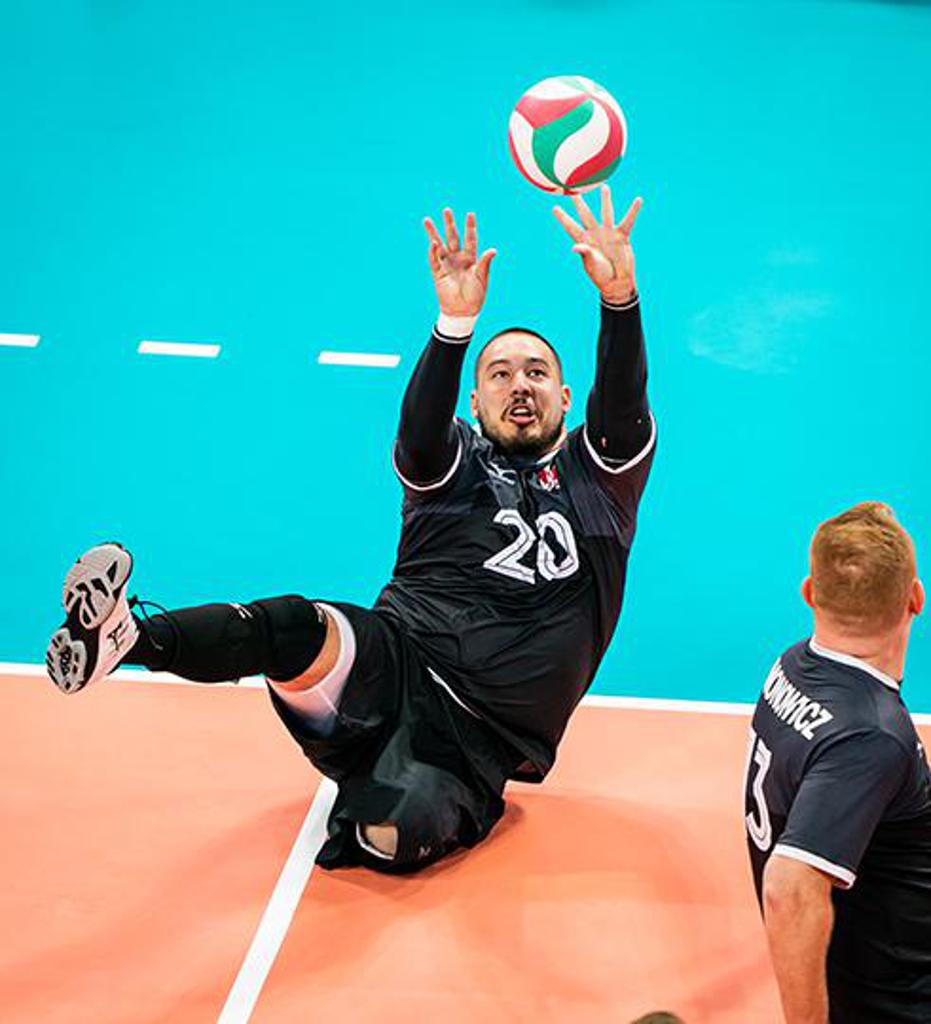 Buckingham competing at the 2019 Parapan Am Games in Lima, Peru. Photo – Volleyball Canada

That awareness and energy to bring sitting volleyball into focus has been one of the things that Kerish Maharaj, Manager of Community Outreach and Grassroots Programming for the Ontario Volleyball Association has been concerning himself with, since the women appeared at the Rio Paralympic Games in 2016. “The first approach we took in 2016 was to get clubs involved and develop an athlete development pathway.”

Not getting the results he was hoping for, Maharaj changed tracks: “In 2018 we partnered with Parasport Ontario and with the help of Joe Millage, chair of Parasport Ontario, we were able to go out to children's rehab centres to start there and present sitting volleyball. Very quickly, those connections grew to include high schools in the Durham region that already had adaptive physical education programs. These high schools were targeted because they are inclusive and had students that were both able-bodied and with disabilities. This approach was significantly more successful with five teams appearing at the Ontario Parasport Games in 2019.”

With understandable pride, Maharaj commented that 80 % of today’s sitting volleyball players in Ontario are from the 10 - 17 age group; demonstrating that this is a specific pathway for athletes and not simply an ‘after thought’ 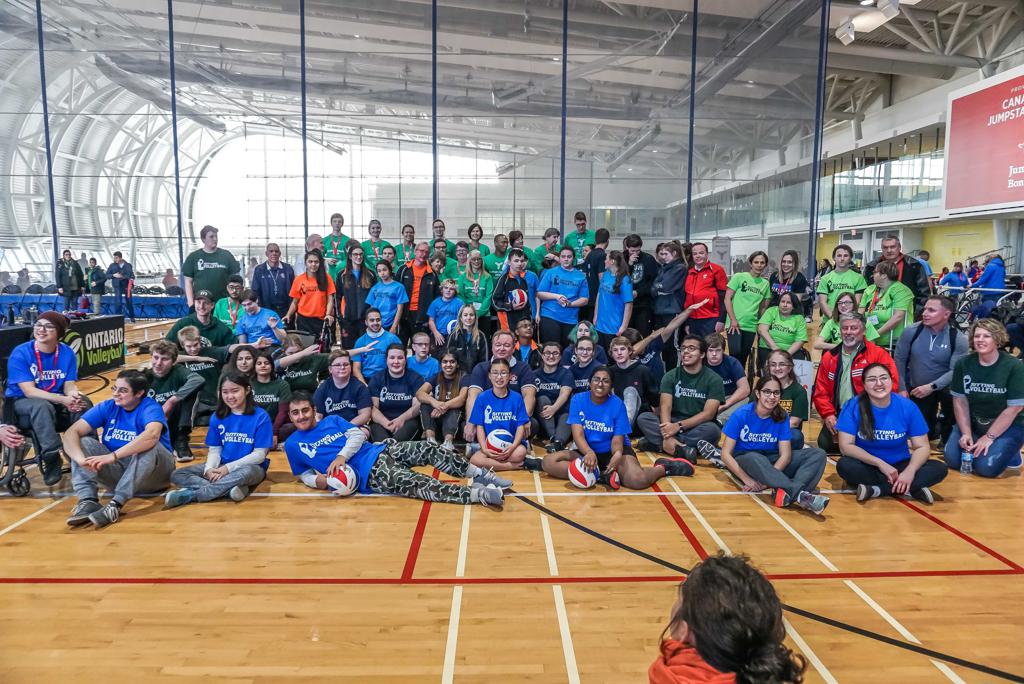 Group photo of sitting volleyball participants at a tournament in the Durham region.

For coach Nicole Ban, women’s coach since 2015 and the Parapan American Games where the women first qualified for the Paralympic Games, earning a berth for the Tokyo Games is front and centre. “As the Paralympic Games are the pinnacle event, highlighting Parasport every four years, qualifying means everything for sitting volleyball in Canada. The exposure at the event cannot be matched and the country truly does rally around supporting its athletes while attending. Qualification would once again put us on the map and show the growth of sitting volleyball in our country.”